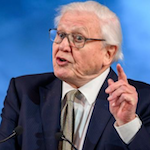 Sir David Attenborough has told Prince William that people have never been more “out of touch” with the natural world than they are today.

Heeding his words, the prince said: “Work to save the planet is probably going to largely happen on our watch”.

Sir David, 92, said: “When I started 60 years ago in the mid-50s, to be truthful, I don’t think there was anybody who thought that there was a danger that we might annihilate part of the natural world.”

In his early career, he said, simply showing people a new animal on television would astound them.

Even then, he added: “Television in Britain in the 50s was only seen by a few million people in southern England.” 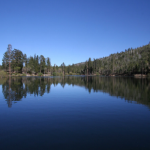 Lake ecosystems make annual environmental changes more predictable. Nature conservation should not focus on individual species but on whole food webs, because the protection of their functioning is important for the predictability of species, especially when global warming is increasing environmental variability.

The environment varies drastically from year to year. Yet the variation of species in natural populations is positively correlated so that consecutive years tend to be fairly similar. Traditional population models cannot explain this phenomenon. Researchers have for long been wondering what the explanation could be, but they have now discovered a mechanism that translates various environmental variations into positive correlations in natural populations.

A team of Finnish and US researchers used a food web model to simulate daily biomass development of plankton and fish species in Lake Constance. The model accounted for the prey-predator interactions and the age structure of fishes. The food web was subjected to environmental variation in terms of algal growth, that is, in the lake’s primary production. Such variation can be caused by annual changes in temperature, for example.

“This model differed from earlier ones, as it depicted a whole food web dynamics with 30 different species or age categories and altogether 133 prey-predator interaction links,” says Associate Professor Anna Kuparinen from the Department of Biological and Environmental Science in the University of Jyväskylä, Finland.