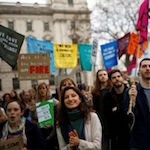 MPs have approved a motion to declare an environment and climate emergency.

This proposal, which demonstrates the will of the Commons on the issue but does not legally compel the government to act, was approved without a vote.

Labour leader Jeremy Corbyn, who tabled the motion, said it was “a huge step forward”.

Environment Secretary Michael Gove acknowledged there was a climate “emergency” but did not back Labour’s demands to declare one.

The declaration of an emergency was one of the key demands put to the government by environmental activist group Extinction Rebellion, in a series of protests over recent weeks.

Addressing climate protesters from the top of a fire engine in Parliament Square earlier, Mr Corbyn said: “This can set off a wave of action from parliaments and governments around the globe.

“We pledge to work as closely as possible with countries that are serious about ending the climate catastrophe and make clear to US President Donald Trump that he cannot ignore international agreements and action on the climate crisis.”