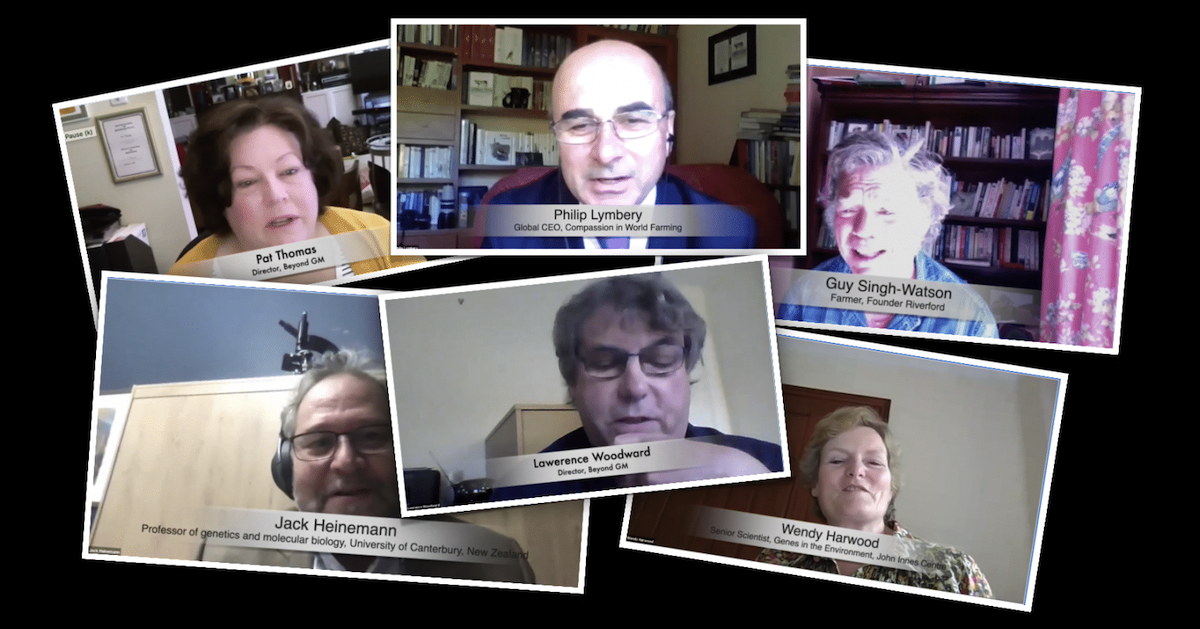 Genome editing is the new “sustainability” buzzword. In the recent House of Lords consideration of amendments to the Agriculture Bill there were frequent references to “precision breeding”, “new plant breeding techniques” and “modern breeding methods” for plants and livestock – all of them euphemisms for genome editing.

This latest incarnation of genetic engineering technology is not one particular method. It is a whole suite of them with differing characteristics. But you wouldn’t know that from the sweeping generalisations made about this “game-changing” technology which, it is claimed, is “akin to natural processes” but “more precise” and has such benefits and negligible risk that it should immediately be freed of regulatory oversight where it will lead the way in a transformative “bioeconomy”.

In the past, such claims for GMOs have been met with incredulity, a healthy dose of scepticism and more than a little bit of ridicule from NGOs and civil society. Not now. There is an increasing willingness to accept that genome editing has – at least the potential – to advance the cause of “sustainable” food and farming, have animal welfare benefits and more speedily tackle some of the difficult issues caused by climate change.

Some have begun accept the claims that genome editing impacts in a way that is similar to natural processes and could be accepted in regenerative, agroecological and even organic farming. One of our partners, Beyond GM, has been running a programme called “A Bigger Conversation” exploring the claims, perspectives and attitudes surrounding genome editing. Some of the findings have been surprising – from all sides.

The latest event in this programme was a webinar which started out to explore the broader issues of “sustainability” – whatever that means nowadays, which all the panelists, including WHAg’s Lawrence Woodward, agreed isn’t very much.

But when the conversation got down to the potential benefits of genome editing some really controversial things emerged.

Compassion in World Farming CEO Philip Lymbery was concerned that adoption of genome editing could entrench industrial farming systems but he nevertheless, supported it’s use in some circumstances. He asked:

“What if, chickens were successfully gene edited so the only eggs with female embryos are viable…If successful, this technology could be a revolution, ending at a stroke, the killing of birth of 5 billion sentient creatures a year.”

In an earlier BGM meeting, support had been expressed for the use of genome editing to deal with dehorning cattle.

Lymbery also voiced support for cell-based meat analogues. While not all of these involve genome editing some of them do.

Organic farmer Guy Singh-Watson also offered some support for gene editing, noting: “I’m not adamantly against the technology” and that “If you could give us a blight resistant potato, I would find it very hard to argue against.” He, nevertheless expressed real concerns around the system, which seems to go hand in hand with GM technology.

As the “Bigger Conversation” programme has revealed these perspectives are becoming more widely held.

The antithesis of whole health

It might be there is a role for genome editing in something that is called “sustainability” but Lawrence Woodward is adamant that it is the antithesis of a whole system approach to health, which is built on the integrity of the whole living organism, be it soil life, plants, animals and man within a living, functioning ecosystem.

Woodward and Hugh Jones, Professor of Translational Genomics for Plant Breeding at Aberystwyth University recently had an online exchange about these concepts and practices. The discussion can be viewed here and from it lots of background references to genome editing, plant breeding approaches, the wholistic philosophy behind the organic approach to health and perspectives on gene function can be accessed.

In the exchange Woodward notes that, “The development of the concepts of organic plant breeding and seed has been primarily driven by ideas rooted in, anthroposophical, holistic, socially focussed agroecological perspectives. From these emerge the precept to “respect the genome and the cell as an indivisible functional entity” and to “follow the concept of respecting integrity of life.”

The consequence of this precept for organic plant (and animal) breeding is that: “any technical or physical invasion into the isolated cell is refrained from and plant specific crossing barriers are respected, irrespective of potential benefit risk assessments.”

Genome editing is clearly invasive and is not wholistic. There have not been enough studies to determine how much of a risk it is to the process of health and well-being. There are no studies to indicate any benefit to the function of the process of health but as the rationale behind genome editing is to “cut and paste”, “cut and delete”, it is surely reasonable to call it “hollowing out the whole”.

Watch the full-length video recording of the webinar here.