What strange times we’re in. A pandemic of this magnitude has not been experienced by the globe since Spanish Flu in 1918 and, I think I’m right in saying, that because of the small world connectedness we have nowadays Covid-19 has spread much further, and affected greater numbers.

It’s easy to be swept along in the terrifying wave of news that bombards us on every media platform 24hrs a day, and for a while, trying to keep abreast of all the latest developments started to really get under my skin.

It all felt so hopeless, so inevitable and I had a feeling of being totally at sea without control of my own destiny.

After something akin to a panic attack, I made the very conscious effort to concentrate on the here and now. The TV was switched off, I unsubscribed from news feeds, I avoided, and still avoid- links posted by people on social media.

I am not in denial. I still read and keep up with developments, but it is no longer taking over my life.

A moment of clarity struck me shortly after lockdown was imposed.

We lamb and calve in April, and a few of our ladies decided to have their offspring a few days ahead of schedule.

Sheep are anxious creatures for the most part. Forever wary, constantly suspicious that my presence must mean something is about to happen that they will not enjoy – although because we are organic they are not subjected to the same schedule of drenches and jabs some of their conventional counterparts may face.

A big Suffolk ewe started to lamb; she was scanned for triplets. I kept an eye from a distance, they cross their legs and resist pushing if they feel threatened in any way.

She produced the first, a good size, and started to frantically clean her new charge. I left her alone for 20 minutes to see if she would produce the second.

When I returned she was pushing, but unproductively. Time to intervene.

I picked up her new lamb in order to get her into a clean pen so I could restrain and help her with her second. This large, bolshie, normally flighty, hysterical creature had transformed into a quiet, doting mother. She muttered and chatted to her lamb as I walked slowly backwards with it, leading her to her pen.

She was washing and talking to her newborn and licking my now gooey arms – trying to dry and cement the bond between her and her lamb. She continued to wash and chatter away as I delivered the second (breech) until presented with the new arrival, whereby the frantic licking took on renewed energy.

The third arrived unaided to much the same rapturous reception.

She was completely lost in her role. Unfazed by me sitting with her, dipping her lamb’s navels, putting buckets and hay in, yet only a few hours before she had been standing at the top of the yard with her ears and eyes trained on me, ready to make a move if I got any closer.

So it dawned on me that there were parallels between her situation and mine. She was uneasy about her lack of escape options, the restrictions imposed upon her movements, with an undercurrent of fear that something bad might happen.

She then lambed and was lost in the moment.

New life, and death to some extent, are constant themes on a farm and it was a timely reminder that life goes on in its simplest forms, regardless of what else the world is doing. 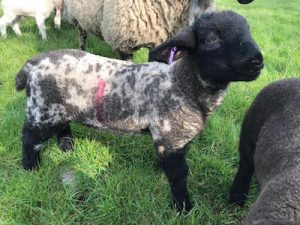 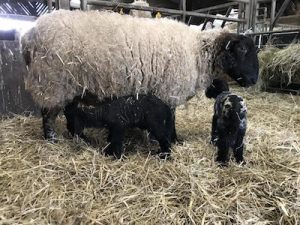 We are very lucky; we live on a farm in a rural location. We spend most daylight hours outside working and are so busy in spring that it is easy to forget that anything is going on at all outside of our farm bubble.

Social distancing and self-isolation are a doddle, we’ve had to make very few changes to our lives- and for that I am very grateful.

But the world has changed, and not all of it in a bad way.  The roads are quiet, the air is clean and the skies are clear of planes. The footpaths are largely unused and so the Skylarks and Curlew seem more vociferous than ever – undisturbed by the huge numbers of tourists that flock to the Peak District every spring.

The weather has been amazing, making up for eight months of rain – so much so it’s almost too dry.

I feel as though Mother Nature has grounded us for bad behaviour, and as punishment is now showing how spectacular she can be when we’re not swarming everywhere, screwing things up.

I imagine if you’re cooped up indoors with no outdoor space, or you’re struggling to put food on the table, or you have health issues that might put you at greater risk; that returning to normal is all you crave – even if that normal isn’t so great.

But I don’t want things to return to normal, and I don’t think they should. We’ve been given an opportunity to change.

It has become clear that we can easily exist without unnecessary travel, endless pointless shopping and the endless resulting pollution.

Can we please reach ‘peak stuff’, so nature and the environment, local and seasonal food and eating with friends and family takes precedence over the number of holidays, cars and outfits people own?

Covid-19 has made a lot of us stop and take stock of what’s important, and food and farming are right up there.

Nurturing the land, our crops and our livestock is more important than ever. It is the dependable natural cycles in the seasons and in nature that are the most life affirming.

And all of that dawned on me as a lamb made its entrance to the world.

Perhaps we should all be thinking of ewe.