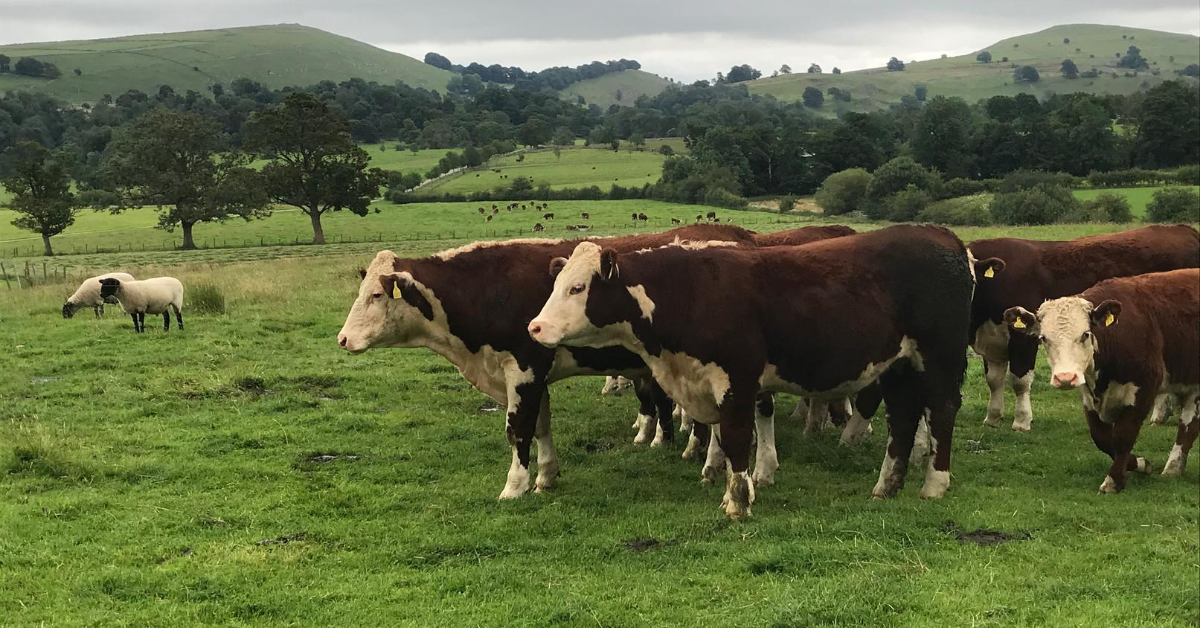 There is no doubt that fluke is responsible for serious economic losses in the farming industry, but what if eradication is never possible?

My husband and I took over running the farm here four years ago. Everything had been ticking along for years, but a quick flick through the medical records showed a consistently high use of flukicide and anthelmintics, alongside letters from our certifying body highlighting that this chemical use was not in line with their organic standards, and something must be done.

The farm is wet. It predominantly lies alongside the River Dove on the Staffordshire/Derbyshire border. The lower part of the farm is made of river meadows; beautifully diverse and rich in wildlife, but they flood repeatedly after prolonged heavy rain. As you might imagine in the Peak District, that happens quite a lot.

The ground on our side of the river is shale and clay, the other side is Limestone. The river meanders along the join of these two rock types. The heavy clay on our side means that cattle must be housed in winter to protect the ground from damage, and the cows from standing in mud. It also means that the ground hangs on to moisture for much longer than it does on the other side. Great in a drought- not so great in a wet year.

The wettest spots are home to rushes and marsh loving plants. There are a feeding and breeding ground for Snipe and Curlew amongst many others. They also provide the perfect habitat for water snails.

Water snails are the intermediate host for Liver Fluke.

The immature and encapsulated fluke larvae (after emerging from their snail host) cling to vegetation in these wet areas and are ingested by grazing livestock. The larvae burrow from the gut to the liver, where they complete their life cycle.

Fluke infection is hard to detect. The best way is combined blood and faecal testing- although a definitive result isn’t possible until postmortem, and this is generally how the farm here knew there was a problem. PM results from slaughter would show mature fluke in the liver.

When we arrived here the cattle were already housed for winter and had been doused with flukicide as per their normal routine and veterinary recommendation.

The farm vets, after boasting to us on their first herd health visit after we arrived that they could get us a derogation (permission from the certifying body) for the use of any drug we liked, encouraged us to ramp up the treatment protocol.

We decided the only way to make headway with these parasites was for some serious changes in husbandry.

Dale and I swore that routine (and evidently ineffective) use of ‘cides’ had to stop.

A quick read of the bottle/packet of any antiparasitic drug will tell you that the product must be handled and disposed of properly and carefully, keeping away from water courses because of danger to aquatic life. The list of PPE that must be worn before applying these drugs to our animals is frankly terrifying.

A quick google search of scholarly articles linking fauna, flora and soil degradation to these drugs is evidence enough of the harm these drugs cause once excreted from your livestock (and pets!).

Jean-Pierre Lumaret; a French researcher, sums it up quite nicely:

“This situation (the routine use of anthemintics) has raised concerns, not only for the possible impact on dung degradation, but also for the consequences on grassland insect communities, ecosystem stability and on the sustainability of pasture fertility”

So we were obviously going to try and avoid their use wherever possible.

We gave it some thought………

The water snail, and therefore the fluke larvae are active in the warmer months- so grazing was the issue. So grazing must be changed.

So we made a very abrupt and simple change.

We fenced the cows out of the wet ground, and away from the snails.

Surely it can’t be that simple?

By the time the first post-mortem results came back from prime cattle sent for slaughter that autumn, it was obvious it was working.

Some of the animals had historic damage in their livers, others were completely clean. There was no difference in body condition in any of them.

Later in the year the blood and faecal results backed this up. The cattle were free from fluke.

It isn’t quite as black and white as this unfortunately. We congratulated ourselves on this apparent outright success a little too prematurely.

Months of clear PM results had followed one of the hottest and driest summers on record. Not great for snails, or fluke- but better for the cattle.

However when it did start raining, it didn’t let up for 9 months. The driest summer was followed by one of the wettest autumn and winter seasons I can remember. The cows were housed in October (their choice). They had simply had enough of battling the elements and wanted in. We obliged.

The next batches of cattle to be sent for slaughter had mixed results on the postmortems. Some had historic scarring but no fluke, most were completely clear, but one or two had active, mature fluke in the liver.

We put it down to the interminable wet- snails were obviously all over the farm, taking advantage of the dreadful weather.

But the cattle sent for slaughter were from the same batch. They had been weaned together, kept together, grazed together. So why the difference?

I am fairly convinced that this is actually a question of susceptibility. Some cattle are more prone to getting fluke- others naturally resistant. The really interesting thing is that the weight, conformation, fat cover- in other words the carcass grading is consistent despite fluke status. The fluke were seemingly having no ill effect on the health of the animal.

There is no doubt that fluke is responsible for serious economic losses in the farming industry, but what if eradication is never possible? What if fluke is only an issue where livestock are pushed too hard to fit farming systems? i.e. high stocking densities, too frequent handling, cocktails of ‘cides’ poured on, poured in, jabbed with?

Our cattle have clean ground to graze every couple of days, they have well established social groupings, they go through no stressful procedures (other than mineral blousing). So, what if this system allows them to deal with fluke without it becoming an issue? Are they actually in balance?

As an aside- our change in husbandry has completely removed the need for other wormers too. The results from bloods and faecal egg counting were comprehensively clear. Our organic inspectors were delighted at our success (as were we) but I am mystified as to why a simple tweak in husbandry (fence out of wet areas and follow clean grazing protocols) is not laid out as an instruction from the auditors where an issue with fluke/worms has been an issue.

Handing out endless derogations for chemicals known to damage the soil microbiome is not helping anyone. The derogation system exists as a ‘last resort’ when welfare/health is compromised, and a helping hand is needed to restore the balance. 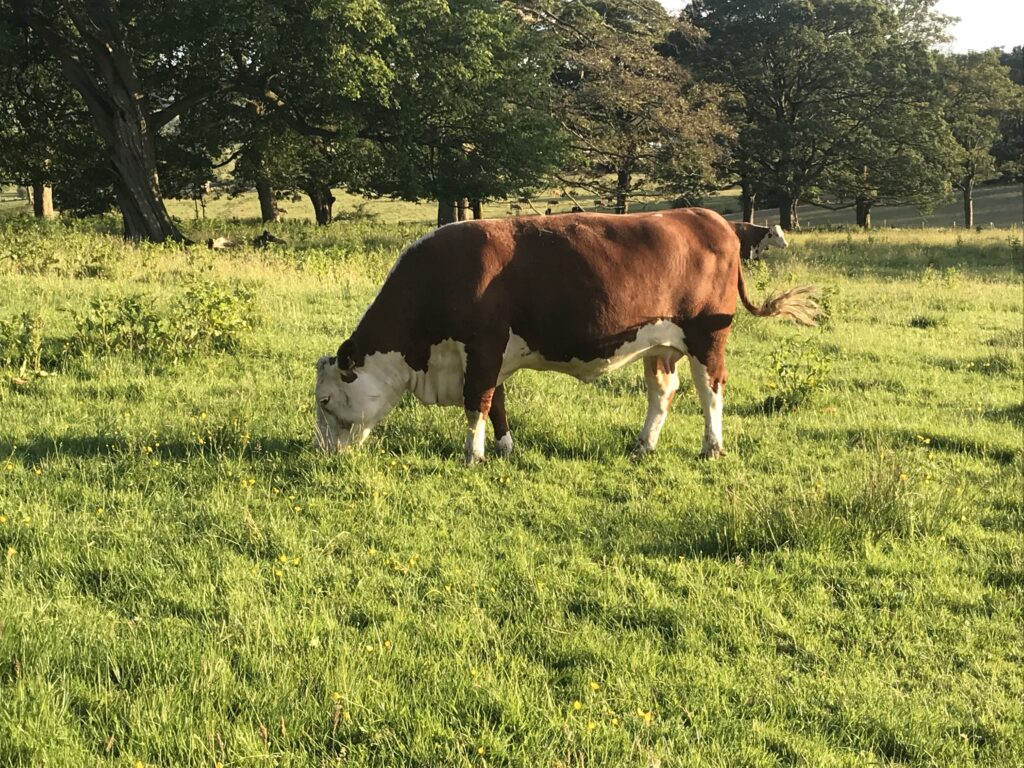 Interestingly although our cattle and sheep are now mostly liver fluke clear, they all do appear to carry a population of Rumen Fluke around with them.

This is a relatively recent discovery- I can only presume that because the rumen is so rarely processed for food (and certainly not checked in an abattoir like the liver) that this fluke species has largely gone undetected.

Our vets immediately pushed us to start a flukicide programme as a course of treatment- despite not being able to tell us how this newly discovered fluke was detrimental to the cow.

The cattle have no outward signs. To be honest they are as fat as butter and the calves grow like weeds. The only ‘evidence’ the vets could provide was anecdotal, and they were basing their push of flukicide use entirely upon one or two quotes from a few farmers.

So we ignored their advice.

We are not in the business of selling immature fat cattle to compete with continental grain-pushed beasts.